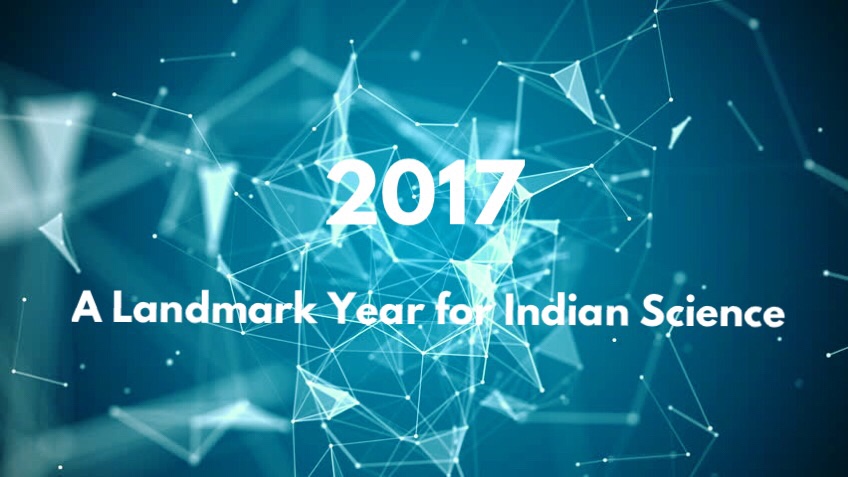 2017 – A Landmark Year for Indian Science

2017 has been an exciting year for science in India. From unheralded incremental innovations to Big Bang headline-grabbing global feats, Indian scientists have done some very important work to push the frontiers of science during the year.

India researchers made significant contributions to R&D across a broad spectrum of fields spanning across space sciences to life sciences. The Indian scientific community was seemingly responding to Prime Minister Narendra Modi’s clarion call to propel our nation into the elite league of the Top Three countries in science and technology by 2030.

The victories, big or small, have been hard won. They are the culmination of years of intensive R&D efforts, frugal innovation, pooled knowhow, and a constant focus on excellence often in the face of scepticism and scarce funding.

The big payoff came early in the year when the Indian Space Research Organisation (ISRO)  scripted history by successfully launching a record 104 satellites into orbit using a single rocket, beating the previous record of 37 satellites deployed by Russia in 2014. It made the world stand up and take notice. Thanks to ISRO, we are now ranked among the world’s Top Six space-faring nations in terms of technological capabilities and an exclusive member of the global space club.

Indian scientists also demonstrated their advanced skills in the competitive realm of life sciences discovery. Not content with making generic versions of innovator products, several Indian pharma companies are themselves turning to innovation. Earlier this year, Glenmark Pharmaceuticals got the U.S. FDA’s nod to initiate human trials on one of their experimental antibody drugs to treat multiple myeloma. Sun Pharmaceutical, too, made progress on the development of a novel psoriasis drug.

Close collaboration between the scientific teams of Strand Life Sciences, the Mazumdar Shaw Center for Translational Research (MSCTR), and the Mazumdar Shaw Medical Center (MSMC) led to breakthrough research in cancer detection. It resulted in Strand Life Sciences becoming one of the earliest companies to introduce the revolutionary liquid biopsy technology in India, which allows cancer diagnosis through a blood test.

Elsewhere, scientists from the Institute of Genomics and Integrative Biology (IGIB) played a key role in the discovery of a potential cure for Friedreich’s ataxia, a genetic disease that damages the nervous system and impedes normal movement in patients. If successful, this novel molecule could help reverse this neurodegenerative disease that so far has no cure.

At Biocon, we have been leveraging India’s value advantage of unmatched scientific talent to indigenously develop innovative biotechnology-based therapies aimed at making a huge difference globally in the treatment of chronic diseases.

Having  launched India’s first novel biologic drug for head & neck cancer, Nimotuzumab, in 2006,  followed by the introduction of  a novel biologic therapy for psoriasis, Itolizumab, in 2013, we have continued to focus on differentiated therapies with a view to make a difference to patient lives.

While 2017 was a challenging year, we concluded the year on a euphoric note with a landmark achievement that demonstrated our advanced R&D capabilities. The US FDA approved a biosimilar antibody drug, Trastuzumab, co-developed by Biocon and Mylan to treat aggressive forms of breast and gastric cancers. It marked a major milestone for India as well Biocon, as we became the first company from India to secure a biosimilar approval in the US. This approval not only establishes Biocon as a credible biologics player from India it puts us in an exclusive league of global biosimilar players.

We also launched KRABEVA® (Bevacizumab), a key biosimilar antibody drug for the treatment of patients with metastatic colorectal cancer and other types of lung, kidney, cervical, ovarian and brain cancers, in India.

These developments endorse the strength of our country’s science and the manufacturing capability to develop world-class biosimilars that conform to best-in-class global quality standards.

India is fast gaining global recognition for the quality of its data scientists who enable evidence based decision making. The ability of our data analysts has led to the emergence of decision sciences at the intersection of technology, business and math thus creating a new man machine ecosystem. The exponential growth in the fields of Artificial Intelligence and machine learning is leading to a huge demand for highly skilled professionals. Over the last one year  the number of analytics jobs in India has almost doubled. Bengaluru-based Mu Sigma, was among the first few companies in India to spot this trend early on and since then has  capitalized on this opportunity to build a billion-dollar enterprise with a reputed client base of  leading multinationals. As more data analytics projects get outsourced to India, due to lack of such skills across the world, we are likely to see a boom in this field in the years ahead.

The Pursuit of Excellence

The Indian scientific community has set new benchmarks in scientific excellence and created a powerful and formidable brand for India in 2017. Our pursuit of excellence extends into the New Year and beyond. And I take this opportunity to thank all our scientists whose achievements have invoked a sense of national pride in every Indian citizen. Our scientific advancements have proven beyond doubt that through conviction and passion we can achieve leadership in science & technology and innovation excellence!

One thought on “2017 – A Landmark Year for Indian Science”

India needs to scale up COVID-19 testing to contain pandemic